Team photo of the inaugural West Coast RFU Representative Team which played it’s first ever matches in our unions history in September 1893. The side travelled on the SS Mawhera to Nelson, where they drew with Nelson 0-0, before travelling to Blenheim to play Marlborough where they lost 2-5.

Welcome to the West Coast Rugby Union website, here you will be able to follow your favourite province and catch up with all your club results and news.

Our fan forum is run through facebook so join us today by clicking here and you can see what is currently going on even Tweet us to your friends to come and check out our site.

Where are we from? Well, the rough and tumble of football was popular in colonial times, and nowhere more so than on the South Island’s rugged West Coast, the domain of miners and bushmen. In the closing decades of the nineteenth century, rugby as we know it today was still evolving.

Often games were a hybrid of other forms of football, with rules and team numbers decided on the day. As the rugby version of the game started to take hold, a West Coast Rugby Union based at Greymouth was established in 1890 (click here to see the announcement as published on the 26th May 1890). The logistics of playing rugby in an area where clubs were spread out over hundreds of kilometres led to a decision by the clubs in the Buller district to split from West Coast in 1894.

West Coast is one of the minnows of New Zealand rugby. In the closing decades of the twentieth century, many players moved away in search of work after mines and other industries closed.

Along with South and Mid Canterbury, Tasman, Buller and Canterbury, West Coast is part of the highly successful Crusaders Super Rugby franchise. 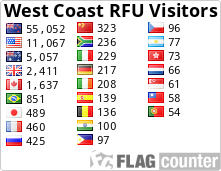